With several resident requests and nearby jurisdictions facing legal challenges based on their at-large election systems over the years, the La Verne City Council consulted with Doug Johnson, the President of the National Demographics Corporation, regarding the City’s election system options in December 2020. The Council determined it prudent to initiate the districting process to prevent any costly potential legal challenges.*

*In addition to the cost of districting, cities served with demand letters mandating they enact districts have been required to pay between $30,000 to over $1 million.

At the July 2021 meeting, the Council unanimously adopted Resolution No. 21-47 which, among other things, determined that it:

In December 2020 and July 2021, the La Verne City Council conducted two study sessions exploring the purpose and process of districting. At its July 2021 meeting, the City Council also directed City staff to engage National Demographics Corporation as its demographer to guide the City through the districting process.

After initiating the process on July 6, 2021, the La Verne City Council held 4 public hearings on

All hearings were publicized on the City’s social media channels, included in the August, September and October City Manager Newsletters, as well as through digital publications including Patch, the San Gabriel Valley Tribune and the Inland Valley Daily Bulletin.

Press releases regarding the hearings and the City’s districting process were also sent to over 50 regional and local media outlets as well as local community groups, including the La Verne Chamber of Commerce, the Latino and Latina Roundtable of the San Gabriel and Pomona Valley, YWCA San Gabriel Valley, the League of Women Voters - Mt. Baldy Area and the League of United Latin American Citizens.

The purpose of the California Voting Rights Act (CVRA) is to ensure that minority population groups are equally and fairly represented in its local government. Having 5 districts instead of 4 districts allows La Verne’s minority populations to unite more strongly in one district as opposed to diluting or dividing them throughout multiple districts.

The La Verne City Council unanimously adopted Resolution No. 21-47 in July 2021, which initiated the districting process with the intent of creating five districts with a rotating Mayor.

While not part of the resolution, the Council also discussed exploring a four-district system with a Mayor elected at-large should members of the public submit maps and feedback using that type of system. As a result, the City’s demographer, National Demographics Corporation (NDC), explored the possibilities of both four districts with an at-large Mayor as well as five districts with a rotating Mayor through this process.

In the end, the five district maps more accurately achieved the goals of the CVRA.

On December 6, 2021, the La Verne City Council adopted Ordinance No. 1107, implementing a 5-district election system beginning in June 2022. You may view the selected map on the City’s districting website here.

As was presented by the demographer during Council study sessions, since the Council placed the matter on the ballot in 1972, they may adopt an ordinance changing it back to not being directly elected. If it had been placed on the ballot by an initiative petition, then it could only be changed by another ballot measure. As a result, when the Council approved the resolution of intent 5-0 in July 2021, they directed the demographer to consider 5 districts.

Similarly to how the process was done prior to moving to an elected Mayor, the Mayor will be selected by the Council Members on an annual basis. The duties of the Mayor include: presiding over the City Council meetings, signing agreements ,and appointing commissioners and committee members with Council approval.

La Verne’s district boundaries were implemented by Council’s adoption of Ordinance No. 1107. Consistent with state law state election code, the City can only initiate redistricting efforts under one of the following scenarios:

Any change outside of the above would subject the City to legal challenge.

Based on the CVRA, districts are not voted on by residents. However, input is gained through the hearing process outlined above, which provides an opportunity for the community to draw maps and offer comments on draft maps, communities of interest or other considerations. All public input was shared with the City Council and taken into consideration during the map selection and adoption process.

Based on federal and state law, municipalities must abide by the following criteria (listed in order of priority):

The adopted map follows all of these criteria in the required priority order. Neighborhoods and communities of interest are kept undivided as much as practicable after compliance with the criteria designated as higher-priority by federal and state law. Below are district by district descriptions:

In the south, the District 5 boundaries are defined by the railroad tracks, 3rd Street, Wheeler Avenue, Foothill Boulevard and the 210 Freeway. The only District 5 border that some might not consider an “easily recognized border” is the two blocks of E Street. However, following E Street kept the University of La Verne, a noted community of interest, united.

District 2 follows the same western borders as District 1. On the north side, District 2 had to stop at Amherst Street because of population requirements–going all the way up to the 210 Freeway for the entire length of the border would have put the map out of compliance with federal law. Many of the census blocks on the south side of Amherst Street extend all the way to Foothill Boulevard, so bringing the District 3 border south of Amherst Street would have also involved too many people that would’ve made the map imbalanced. Fruit Street is an easily recognized major road used to step from the freeway to Amherst Street.

On its southern border, District 3 follows the freeway and Amherst Street, as noted above. The western border of District 3 is Wheeler Avenue, a major road and easily recognized boundary. The northwest boundary of District 3 ideally would have been Marshall Creek, but that would have left District 4 under-populated by 9%, putting the map out of compliance with federal law. The houses bordering Marshall Creek on both the south and north sides of the Creek are united in District 3 to meet federal equal population requirements.

Finally, District 4 is bordered by the easily-recognized boundaries of the 210 Freeway, Foothill Boulevard and Wheeler Avenue, with the rest of the District 4 and District 3 border as described above. 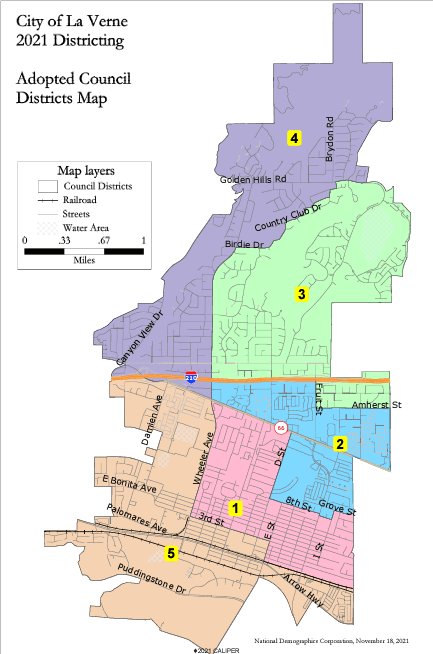 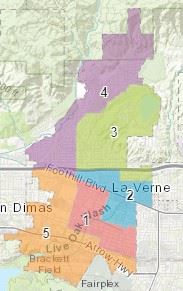 During the process, the City created an independent webpage to house all districting-related information including the hearing schedule, press releases, mapping tools and more. Visit MapLaVerne.org for more information.